Maruti Suzuki has long dominated the country’s passenger vehicle segment. Once again in the list of top 5 best selling cars of the country, only cars of Maruti Suzuki have shown their fire. But this time, the biggest change has been seen in the sales report, Maruti WagonR, called the Toll Boy of the company, has also defeated Swift and Alto in the sales. So let’s know about the five cars that have performed the best in the month of April.

Maruti Suzuki’s compact sedan car Dzire is the fifth most sold car in the country. The company has sold a total of 14,073 units of this car in the month of April. This car, which comes with a total of four variants, uses a petrol engine of 1.2 liters capacity. This engine comes with 5 speed manual and automatic gearbox. Features of the car include cruise control, automatic LED headlamps, auto folding out side rear view mirror, push button start, 7 inch touchscreen infotainment system, rear parking sensor, anti lock braking system (ABS), electronic brake distribution. (EBD).

Maruti Suzuki’s premium hatchback car Baleno has become the second most sold car. The company sold a total of 16,384 units of this car in the month of April. It is the fourth most sold car in the country. In this, the company has used a 1.2-liter VVT petrol engine, which generates 82 bhp power and 113 Nm torque. This car comes with both manual and automatic gearboxes, but its manual variant gives the best mileage. In this, the company has used Smart Hybrid (SHVS) technology. 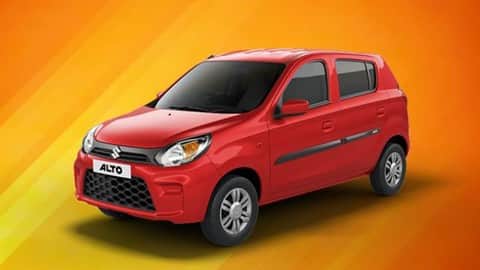 A total of 17,303 units of Alto, the entry level most affordable hatchback car of Maruti Suzuki, have been sold. Always on number one position, this car has become the third most sold car in the country in April. The company has used a 796cc capacity petrol engine in this car which generates power of 47 bhp and torque of 69 Nm. For almost 20 years, Maruti Alto has been one of the best selling cars in the country. Due to the low price and better mileage, the middle class family loves this car very much. Maruti Suzuki Swift has recently been launched in the market with new updates. In the past April, a total of 18,316 units of this car have been sold. In this, the company has used the new dual jet petrol engine. This petrol engine of 1.2 liter capacity generates 88 bhp power and 113 Nm torque. This car is available for sale in a total of four variants. It also became the most sold car in the country in the last March, during which the company sold 21,714 units. The hatchback car WagonR, known as Maruti Suzuki’s Tall Boy, became the country’s best-selling car in April. During this time, the company has sold a total of 18,656 units of this car. This car is available with two different petrol engines. Its one variant has a 1.0-liter capacity engine and the other variant has a 1.2-liter capacity petrol engine. In this car you get 341 liters of boot space.

note: The price of cars here is given according to Exshroom Delhi. Also, the mileage of the vehicle depends on the road condition and driving style, so differentiation is possible.

110cc Honda scooter gets a good discount, getting thousands of discounts

Honda Activa 6G: The best selling scooter in the country is getting a bang on offer, huge savings with cashback

New Delhi, May 7 There is increasing evidence to suggest that COVID-19 is not just a disease of the lungs...

Johannesburg, May 7 A Covid-19 vaccine developed by the US-based biotechnology company Novavax has been found effective against Coronavirus' B1351...

London, May 7 Most patients hospitalized for Covid-19 infection return to full health, but one in three may develop lung...

If you were planning to buy a Tata car then now you will have to spend more money for it....