Tata Motors has launched its smallest SUV Tata Punch. The company has kept its initial price at Rs 5.49 lakh. While the price of the top variant goes up to Rs 9.09 lakh. In this way the Tata Punch SUV has been brought between the company’s Tiago and Nexon. Customers can book this SUV for Rs 21 thousand. The delivery of the car has also started from today itself.

Variants and Price
The car has been brought in a total of 4 trims (Parsona): Pure, Adventure, Accomplished and Creative. The pure variant with manual transmission has been priced at Rs 5.49 lakh. While the Adventure, Accomplished and Creative variants with MT gearbox are priced at Rs 6.39 lakh, Rs 7.29 lakh and Rs 8.49 lakh respectively. You will have to pay an additional Rs 60 for the AMT variant. The special thing is that these prices are introductory, which will be valid till 31 December 2021.

Also read: Great look and features are strong, yet these 5 vehicles could not run in India

5 star safety rating
It is the safest car in the country. It has got a 5 star rating in the Global NCAP crash test. Not only this, it has left behind all other vehicles in India in total points. It scored 16.45 points out of 17 in the adult safety rating. Similarly, in terms of child safety, this SUV has scored 40.89 points out of 49. For safety, it has been provided with features like dual airbags, ABS with EBD, front fog lamps with cornering function, reverse parking camera, rear defogger and puncture repair kit. 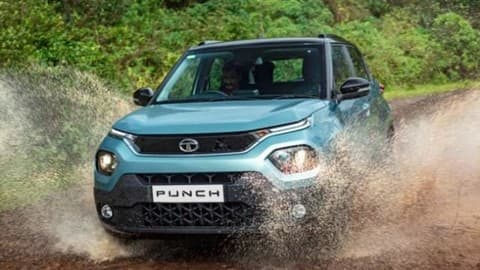 Engine and performance
Tata’s new SUV is powered by a 1.2-litre 3-cylinder naturally-aspirated petrol engine. The same engine is also given in Altroz, Tigor and Tiago. This engine generates 85bhp power at 6,000rpm and 113Nm peak torque at 3,300rpm. The engine is mated to a 5-speed manual and AMT (Automated Manual Transmission). It has two driving modes – Eco and City. It also has features of cruise control and idle start stop system.

Also read: This SUV of Tata did amazing, sales increased by 61%, features are strong

New Delhi, December 3 People with allergic conditions such as hay fever have a lower risk of being infected by...

Car maker company Honda has announced year end sale on its vehicles. In December, Honda cars can be bought cheaply...

New Delhi, December 3 While there is no evidence to suggest that existing vaccines do not work on the Omicron...

Mahindra & Mahindra is soon going to increase the lineup of its XUV700 SUV. The company will soon launch a...

Iconic British bike company BSA Motorcycles is back once again. Classic Legends, a Mahindra Group company, has worked to revive...

New Delhi, December 3 People with allergic conditions such as...